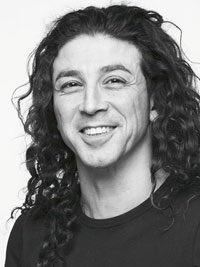 As a son of Turkish parents, Dergin Tokmak was born in 1973 in Augsburg. At the age of two, Dergin fell ill with poliomyelitis. He lost control over his left leg and could use his right leg only to a limited extent.
In 2004, the design draftsman nevertheless succeeded in fulfilling a lifelong dream: He is the first German artist who is employed in the world famous circus Cirque du Soleil. In the meantime he feels at home all around the world and besides his work as an artiste has appeared in several music clips, among others in Til Schweiger's Wo ist Fred?, and, as a member of his breakdance team, was on tour with Die Fantastischen Vier and Run DMC.