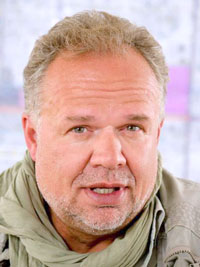 Kilian Kleinschmidt, a Berliner born in Essen, looks back onto a moved life: Born in 1962, he grew up in Berlin as a son of two teachers and decided to travel after his high school graduation in 1980. But the planned trip to South America ends after only a couple of days in the French Pyrenees where he first produced goat cheese for seven years and later worked as a slater for traditional slated roofs, despite his fear of heights. After separating from his former partner with whom he has a daughter, he drove through the Sahara to Mali on a motorcycle in 1988 and by chance discovers development aid as a new passion.

In the last twenty years he supported, among others, the organization of a camp for the so-called »Lost Boys of Sudan«, was in Mogadishu as a representative for the UNO during the military operation in 1993, in which 18 Americans were killed and which wrote history as the Black Hawk Down-Incident; spent two years as a contact man for the rebels of the Tamil Tigers in Sri Lanka, and coordinated one of the biggest humanitarian airlifts for Ruanda.
Meanwhile, he was in the Kosovo, in Kenya, and in Uganda, before he went to Jordan as Senior Field Coordinator for the UNHCR, where he has been running the second biggest refugee camp in the world, Zaatari, at the Syrian border ever since. 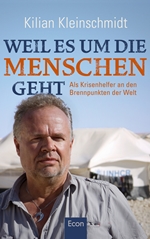